The first Fig of the Spring semester brought together 4 faculty, 2 administrators and a guest speaker Donald Welch. 2 of the faculty were new to the FIG.

The FIG began with updates and discussion regarding the rolling out of Cuny Unlimited and specifically where the program was to be housed at KCC. This question was brought to the attention of the central Cuny Accessibility office.

Enid Stubin a new member of the FIG spoke about her inclusion of Melissa Riggio students in her English/Shakespeare class. This led to the FIG facilitator sitting in on the class and seeing how inclusive the class was with a MRHEP student reading the part of Henry V. An impressive inclusive model.

The guest speaker Donald Welch spoke about his work  as a poet and working with students on the spectrum. This creative work included rhythm, movement, and literacy and could be easily integrated into inclusive classrooms whether in music, education or English.

The second FIG of the semester was just a week later to co-ordinate with KCC’s Accessibility Week. The  topic for the week was around disability and employment. Therefore 3 Melissa Riggio alumni students were invited to present on their experience of employment and internships. 2 faculty, 4 staff , including form the Accessibility office,  2 students and the 3 guests were present. Refreshments were also provided by the Accessibility Office.

The challenges that the alumni had faced finding employment was sobering. Although all were personable,  willing and eager to work only one had paid work. The two other alumni were volunteering. the stigma and discrimination regarding disability in the work force was evident.

The alumni were delighted to be invited and photographs were taken out on the KCTL terrace over looking the sea. 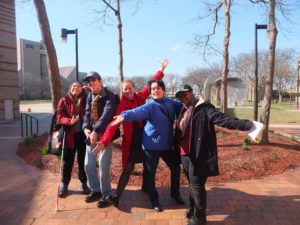 The third and final FIG brought together 3 faculty including Don Huime head of Physical education and one new faculty member from the art department, 2 staff and one MRHEP mentor

Challenges and good news was shared….

Kensaku Matsuda administrator the Melissa Riggio program reported that some students now had access to KCC emails and the library. He also reported that the allocation of classes for MRHEP students was now through the Presidents Office.

Sue Carpenter spoke of her visit to Enid Stubin’s class, and mention was made of the MRHEP being given a presidential award at the KCC Seaside Splash in June.

Carole Gothelf director of the MRHEP program had presented on Willowbrook for a Psych 2400 class in May. She had spoken about how 50 years ago young adult with disabilities were living in inhumane conditions in Willowbrook and now 50 years later there were able to attend college. The question was then posed as to who FIG members thoughts and aspirations were for 50 years time? The word inclusion was suggested to be obsolete.

Sue Carpenter spoke briefly about her sabbatical in Europe – including presenting and researching   at Southampton University Institute for Inclusion, Trinity College Dublin and Salzburg University Austria.

Prof. Jeremy Sawyer ( Psych and Education ) was mentioned as kindly hosting the FIG for the coming semester.

Need help with the Commons? Visit our
help page Send us a message
Skip to toolbar

Built with WordPress | Protected by Akismet | Powered by CUNY